Director
(1886-1979) Born December 23, Toledo, Ohio, USA
Key Production Country: USA
Key Genres: Drama, Romance, Melodrama, Romantic Drama, Adventure, Crime Drama, Psychological Drama, Family Drama
Key Collaborators: Max Steiner (Composer), Lizabeth Scott (Leading Actress), David O. Selznick (Producer), Albert S. D'Agostino (Production Designer), Carole Lombard (Leading Actress), Joel McCrea (Leading Actor), Charles Coburn (Leading Actor), Pandro S. Berman (Producer), James Wong Howe (Cinematographer), Frances Dee (Leading Character Actress), Kay Johnson (Leading Character Actress), Agnes Moorehead (Leading Character Actress)
“A contract director for most of his career, John Cromwell's output was extremely variable in quality. A talented and intelligent director, he was certainly capable of better things and, as an actor himself, he developed a reputation in the 30s as one of Hollywood's finest and most sympathetic women's directors. Yet he brought off some tougher assignments when given the opportunity. The Prisoner of Zenda (1937) for Selznick/UA was one of the best swashbucklers ever; later he directed Bogart in Dead Reckoning (1947) for Columbia, a memorable 40s film noir, and closed out his main Hollywood stay with a remake of the classic 20s gangster story, The Racket (RKO, 1951).” - Joel W. Finler (The Movie Directors Story, 1985)
"On the stage from around 1906, John Cromwell was a successful producer and director of plays throughout the Twenties. He went to Hollywood in 1928, and rapidly established himself as a reliable studio contract director and, thanks perhaps to his stage work, as a remarkable director of actors. Players as different as Bette Davis, Raymond Massey, Robert Mitchum and Irene Dunne did some of their best work for Cromwell, a man who, when in his eighties, was still a magnetic personality brimming with enthusiasm." - The Illustrated Who's Who of the Cinema, 1983
“From the swashbuckling adventure of The Prisoner of Zenda (1937) to the gritty women's prison drama of Caged (1950) is a long movie distance, but John Cromwell traveled it with relative ease. His work as a film director, after a successful stage career as an actor, director, and producer, took him into virtually every kind of film, from emotional family drama (The Silver Cord, 1933; Since You Went Away, 1944) to exotic romance (Algiers, 1938; Anna and the King of Siam, 1946)… Like George Cukor, Cromwell resented being called 'a woman's director', but he did very good work with actresses.” - Ted Sennett (Great Movie Directors, 1986)
"Directed most scripts that were given to him by his studio bosses as professionally as possible, encouraging the performers to give of their best. Mostly at RKO in the 30's, it was he who gave Bette Davis her first meaty part in Of Human Bondage (1934)." - Ronald Bergan (A-Z of Movie Directors, 1983)
"When sound hit the movies, Cromwell was nearly forty, and he had a fine career as actor and director onstage. But then, for over twenty years (until he came under suspicion for leftist sympathies), he had a successful Hollywood career as a deft, self-effacing director who was especially sensitive to women and respectful of novels and plays. Was there more than that? I find it hard to detect theme or personality, and nothing Cromwell ever offered in interviews encouraged such hopes. It was his intent to “realize” scripts and do the best job possible. It may be telling that he was one of the favorite directors of David O. Selznick, who appreciated men prepared to be the humble and tireless enablers of his dreams and second thoughts." - David Thomson (The New Biographical Dictionary of Film, 2010)
Selected Filmography
{{row.titlelong}}
GF Greatest Films ranking (★ Top 1000)
T TSPDT N 1,000 Noir Films
See Also
Irving Cummings, Michael Curtiz, William Dieterle, Edmund Goulding, Victor Fleming, Jean Negulesco, Irving Rapper, A. Edward Sutherland, Richard Thorpe, Frank Tuttle, Sam Wood, William Wyler.
John Cromwell / Fan Club
José Luis Guarner.
"Fan Club"
These film critics/filmmakers have, on multiple occasions, selected this director’s work within film ballots/lists that they have submitted. 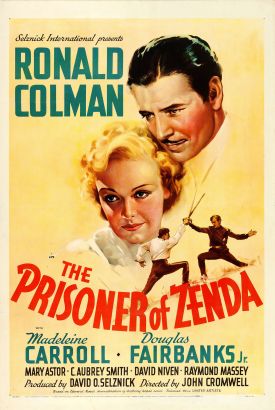